In Defense of Anger

In order to really address questions of boundary awareness, it is essential to discuss the emotion that gets a bad rap; Anger.  Too often when we say "anger," the experiences that come to mind are those of rage - "anger on steroids."  But that skips over the essential role of anger in our personal expression and self-awareness.  Rage is another thing altogether.  Where rage is loud and aggressive; anger is quiet and clear.  Where rage pushes people away; anger identifies the line between enough and too much.

I have a strong image of my angry part.  She looks a lot like Cher in the '80s; long black wavy hair, tight fitting jeans, and attitude.  She has, of course, been around for many years, but I only really got to know her 4 years ago in the midst of my level one IFS (Internal Family Systems) training.  It was around half-way through the intensive training, and I'd gotten used to starting the training day with the practice of internal observation (mindfulness), to determine what needed attention at that days session.  Anger didn't wait for the session to begin, in fact she showed herself as I waited for a light to change on my way to the training. 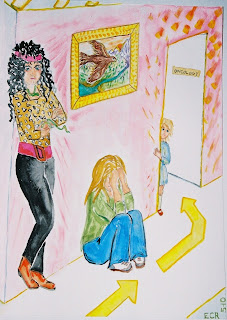 As I followed up with that day's "introduction" to Anger, it became clear to me that this part of myself had been fighting for awareness, not to "go off" on anyone, but to protect and support me.  Focus on the part showed me example after example of times she had been nearby throughout my life, and each was a strong indication of a time someone had demanded more of me than was their right; or had misunderstood my intent; or had been threatened by my abilities.  In other works, they had crossed boundaries into my personal, emotional or physical space.  Anger had gotten me through the toughest fights of my life, during cancer and other times of personal crisis.  Sometimes I had neglected to heed her warnings, instead turning anger toward myself in the form of depression, but she stood strong and kept me moving forward.

Now, I know anger to be my ally, and I attend to her before she has to get more intensive or self-directed in order to gain my awareness.  She provides balance and clarity in my responses to interpersonal and global concerns, poking at my solar plexus (the power chakra) if injustice threatens to intrude.  Sometimes we have to decide if it is worthy of a commitment to action, or agree to just let it go, but it is a decision made together with conscious attention to the boundaries and ethics, and who it may affect.

I find it interesting that keeping that part of myself nearby results in a more open, calm awareness, and more receptivity to the foibles of others.  We know who we are, and what space is ours to manage, so are less reactive to what we cannot control.  Anger supports, and deserves, gratitude.

Thanks for watching my back, Anger.  I think I will keep you as close as my middle name, Claire, for your gifts of clarity.
Posted by Unknown at 7:28 AM