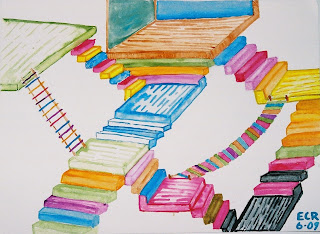 I was out of town over this past weekend, celebrating a sister's birthday.  While only 4 of 6 sisters were there, it was clear to each of us that the other 2 were present, along with our mother.  In the midst of conversation, it was as if we could hear a comment, sometimes coming out of our own mouths, that was indicative of one of the missing members of our group.  How was it that those who were not physically present could "appear" among us?  This was especially significant since only one of those not present is still living.  The explanation for this phenomenon might be found in the concept of internalization.  This refers to our tendency to create images and "sound bites" of influential others in life, such that we can (sometimes unconsciously) predict and experience their presence or perspective in our daily activities, even though they are not physically there.

We are social animals, and our experience of our social and familial systems shapes who we are.  It is in relationship that we learn our worth; our competence; the trustworthiness of the world, and the people in it.  Attachment is a social science term for the process that takes place in close relationships, especially the initial caregiving relationship(s).  Before a baby is even born, she takes in meanings and messages from the environment in the form of sound, light, and the physiology of her mother's response to her environment.  After birth, more signals are received in rapid succession, from voice, eye contact, physical touch; at all sensory levels.  These signal might be compared to a computer program which establishes codes and translates data, within the parameters of that program.  Thus, attachment is the process by which the infant learns to function in the world, in preparation for eventual movement away from the caregiver, and into peer relationships.  It is an efficient model of learning from receptors that are wide open at the start, but eventually settle into patterns that define our expectations of ourselves in relationship to others.

The result of this process is that we enter later relationships with sets of expectations that may reflect upon each interaction, sometimes enhancing, at other times disrupting the flow of those experiences.  If a person or situation matches the early "program" for safety, we can participate effectively in that relationship.  If, however, the existing model included frequent failures in support, or examples of danger in relationships, it is likely that one's expectations will distort or block reception of signals about the other's intentions.  It can be confusing for all involved when an effort to connect is responded to with anger or anxiety.  Those are examples of times that the internalization of traumatic relationship elements influence one's ability to participate effectively in forming new, safer relationships.  These efforts become even more complex when both members of the newly formed dyad bring their own attachment "baggage" into the conversation.


Even less traumatic interactions, or those that take place in later relationships, despite effective early attachment models, have influence in later interpersonal interactions.  We carry a blueprint from early programs that filters what we see and how we experience others.  Sometimes being aware of the likelihood of those influences allows us to step back from our initial response to see more clearly the possibilities of new, perhaps healing, opportunities to connect.  At other times, the internalized models from significant attachments can be a comfort after that loved one is no longer available for direct contact.


It makes sense that a gathering of those who share similar attachments to the same people would generate even more of the internal energies from those who loved, and were loved by the different members of the group.  (Or, depending upon the attachment model, negative energy might also be compounded by association.)


The birthday gathering I participated in over the past weekend is a great example of the whole of our sisterhood being greater than the sum a collection of individual family members.  There is great meaning in the joint energy of connectedness, and, for those of us fortunate in the safety of our relationships, comfort in the shared significance of family attachment.